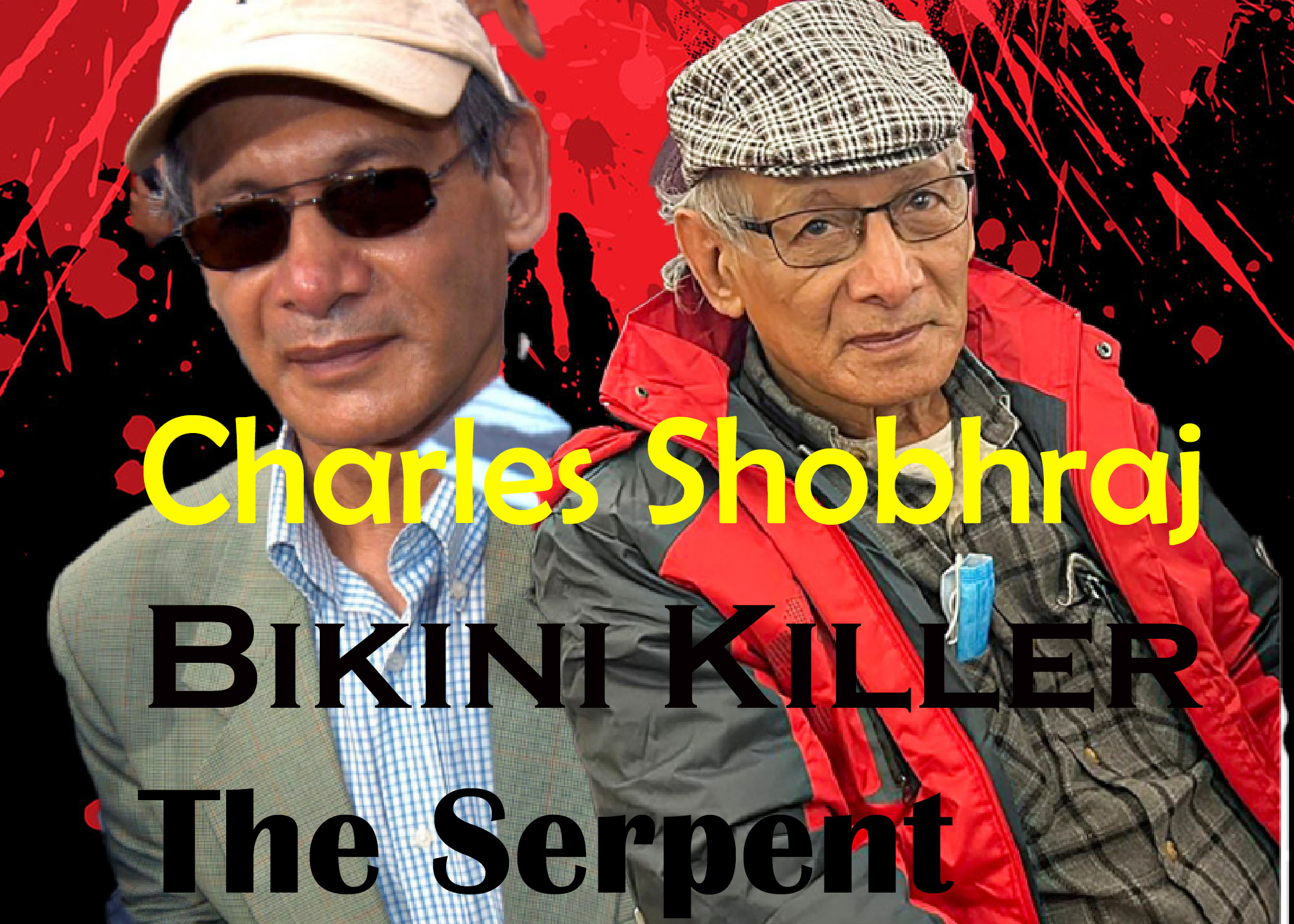 Charles Shobhraj is known to have killed at least 12 people around the late 1970s targeting the Western tourist traveling the hippie trails of South East Asia. His modus operandi includes drugging, robbing, strangling and sometimes burning.  He is cunning and always has his way for manipulating his victim to believing in him only to become his next prey. He is known as the bikini killer due to his victims attire when they were found and also ‘The Serpent’, because of his cunning ways of escaping prison every time.

He was born in 1944 in Saigon and his full name is Hotchant Bhawnani Gurumukh Charles Sobhraj. His mother was a Vietnamese and his Father was an Indian. He had a rough childhood where he was stateless after his father abandoned his family. His mother’s boyfriend who was a French Army Lieutenant then adopted him but he was constantly neglected after the couple had their own children.

In Catholic boarding school, Charles was often suffered by racism and insults. He soon became problematic during his teen and started to commit petty crimes.

He had his first prison sentence when he was 19 for a burglary in 1963. However, the imprisonment did not stop him from committing further atrocities.

After being released from prison, Charles met Chantal Compagnon where both of them fell in love. On the day Charles Shobhraj proposed Chantal, Charles was arrested for trying to evade the police while driving a stolen vehicle. Charles was sentenced to prison again for eight months. After that, Charles and Chantal got married in 1969 and they soon fled to India.

Over the next few years, Charles Shobhraj would continue to rob and scam leaving trails of his crimes all over the country. Charles was then arrested for a failed jewelry store heist, where he was imprisoned again. He pretended to have appendicitis in order to escape from prison. He faked it so well even the surgeon got convinced that the appendicitis was real. Charles successfully escaped after the surgery.

Charles and Chantal along with their baby daughter then travelled to Iran. After a few times of escaping and constantly living in poverty Chantal was tired of running and wanted a peaceful life. She then left Charles and returned to Paris to have a normal life with her daughter.

Charles Shobhraj spent the next few years travelling to the Europe and the Middle East using the identities he stole. He would pose as a professional gem dealer to finance his life. He found that the authorities in Asia could be easily bribed so Asia became his perfect ground for committing all sorts of crime.

Charles Shobhraj would soon meet Marie-Andree Leclerc a tourist in Thailand. Being drawn to Charles charisma, Marie quickly fell in love with him and later became his faithful accompany. Together they pretend to help backpackers in need and invite them to their apartment in Bangkok for a pool party where they would drug them, rob their money, checks and passports when they had chance. When the victims found out about them, Charles would murder to silence them.

Charles was also accompanied by his Indian sidekick Ajay Chaudhry in his series of crimes. Their first victim was an American tourist in Bangkok who joined the pool party but later drugged and robbed. After that, they drove the girl to the beach and drowned her. When the authority later found the body, it was assumed that it was a drowning accident because the victim was wearing a bikini. However, this is just Charles’ way of misleading the authority and hide his crimes. And that was how he got the name Bikini Killer.

Charles and Ajay would continue their murder spree in Bangkok, Nepal and India. Some of the victims were found to be strangled to death and some were burned alive. Most of Charles’ victims were western travelers but there was one occasion where he murdered an Israeli scholar just for his passport.

He would keep his entire victim’s passport in a safe in his apartment and the trio would travel to different countries by assuming the identities of their victims to confuse the police.

When they were all away for a trip, one of the victims escaped their apartment with the help of Charles’ neighbor.

Herman Knippenberg’s contribution on his arrest

In 1976, a Dutch diplomat named Herman Knippenberg received a letter about the disappearance of a Dutch couple. The concerned diplomat then brought the matter to the embassy but was told to leave the matter to the police. The police on the other hand were slow and reluctant to take actions because there were insufficient evidence and the news of the serial killer will affect Thailand’s tourism.

Knippenberg began investigation with his wife Angela Kane. They discovered that the missing couple had met a gem dealer in Thailand named Alain Gautier; an alias used by Charles, and was not heard of ever since.

With the help of Charles’ neighbor, they were able to put all the pieces together and build a solid case against Charles. They eventually convinced the police to arrest the gang.

Charles Shobhraj remained calm during police interrogation and managed to convince the police that he is an American citizen by using one of his victim’s passport. He was released from the police custody not long after, possibly by bribing the officer there.

After that, Charles and Marie fled to India to form a new criminal gang where they managed to recruit two western tourists to join them in their crime. In the meantime, Knippenberg, who had collected more concrete evidence, shared the entire story with the press. The explosive story made headlines on ‘The Bangkok Post’ and caught the attention of authority in Thailand. The authority then issued an international arrest warrant and soon the world would begin its manhunt of the ‘Bikini Killer’.

In India, Charles started to plot his most audacious heist when he saw a group of engineering students from France visiting New Delhi. Charles and his associates in crime would disguise as a local tourist guide leading the group around India and rob them when they had the chance.

After befriending them, he warned the group about the dangers of dysentery and offered to provide them with the drug needed to prevent it, which was the mixture of sleeping pills created by Charles himself. However, the plan went horribly wrong and the drug took effect much earlier than they expected. The group started vomiting and soon they realized it was Charles’ drug that was causing the whole mess.

A few students restrained Charles’ and contacted the police ultimately leading to the gang’s arrest. Finally, the master criminal and his accomplices were apprehended for good. Marie André was sentenced to life imprisonment but later diagnosed with terminal ovarian cancer. The supreme court of India overturned her case and she was allowed to return to Canada for rest of her life. Marie then died in 1984.

Charles on the other hand, was trialed in 1978 for manslaughter and was sentenced to prison for 12 years.

His life in prison was like a vacation in a five star hotel. He managed to bribe, befriended the prison guards, and was granted whatever he wished for. He even gained celebrity status in prison where other inmates would look after him and had many female admirers. He also charged big amount of money for people who wanted to interview him.

However, even after Charles’ 12 years in prison, he would still be extorted to Thailand and stand trial and possibly be sentenced to death penalty.

In 1986, by claiming it was his birthday, Charles threw a big party where he would prepare meal for his inmates and prison guards where the foods were drugged. Soon the prison guards fell unconscious and The Serpent walked out the most heavily guarded prison in India without a sweat.

Almost three weeks later, he was arrested in goa and his sentence was extended for another 10 years.

As he sneakily calculated, his arrest warrant was already expired. So in 1997, he was sent back to France living as a free man with no arrest warrant on him. Like in his prison, he charged journalists or his fans a huge sum for any interview or lunch sessions.

However, Charles returned to Nepal on 2003 only to be arrested at a casino for murder of a couple in 1975. Charles denied his crime and insisted he never have been to Nepal before. However, with the evidence from Knippenberg, he was ultimately sentenced to life in prison.

He married Nihita Biswas, a Nepali advocate in 2008 while in prison.

In December 23, 2022, at the age of 78, the supreme court of Nepal granted the release of Charles Shobhraj and returned him to his home country. It is hard to know exactly how many murders he committed but looking at his history and thinking it is possible that there are much more than 20 murders related to him.

Watch this : The Serpent by Herman Knippenberg