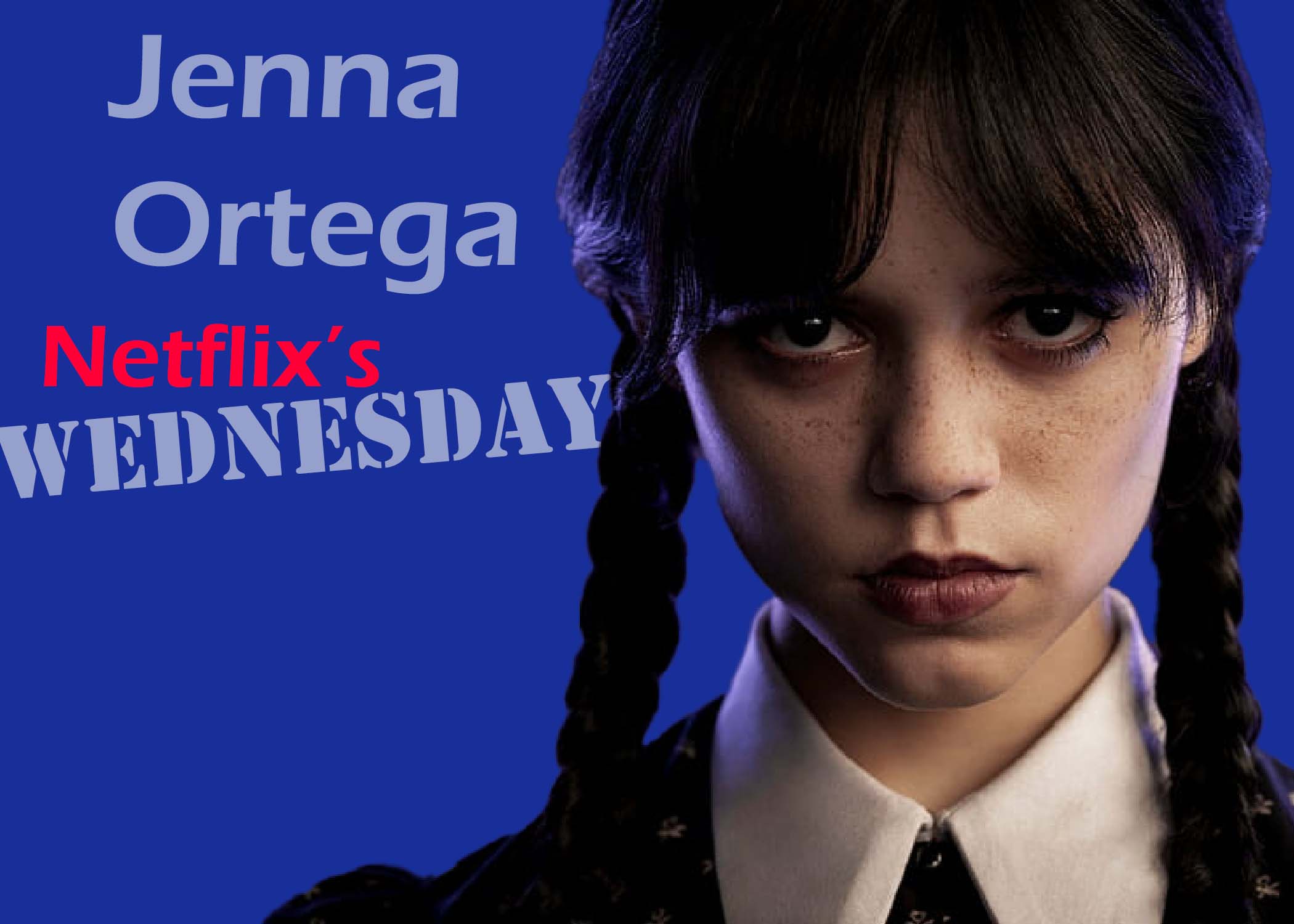 Jenne Ortega | A few people in Hollywood have come on the scene at such a young age and given us amazing performances only to consistently reinvent herself time and time again. Of course, I am referring to Jenna Ortega; this American actress is renowned for her portrayals in popular television series like ‘Jane the virgin’ and ‘Stuck in the middle’. Beginning her career as a child artist at six years old she also made the transition to some big motion picture films and some juggernaut streaming projects as well all while displaying her range as an actress.

However that does not mean her journey was easy like how did she go from being a Disney star to playing the upcoming role of Wednesday Adams in Tim Burton‘s new Netflix series ‘Wednesday’.

Jenna Ortega was born on September 27, 2002 in Coachella valley, California. Jenna Ortega is 20 years old in 2022. She is the fourth child of her parents and she has Mexican and Puerto Rican ancestry she grew up with four siblings two sisters Aaliyah and Mia and her two brothers Marcus and Isaac in the Desert valley in Southern California.

Now it appeared that out the gate Jenna Ortega really developed an interest for acting at six years old. She was very determined. She told moviemaker, “I initially wanted to start acting when I was six years old but my mom said no so I kind of pleaded with her for a while and to shut me up she got this monologue book that she got at Barnes and Noble.”

Although at that time many parents would instinctively have the reaction that Jenna’s mother had thinking of it to be a fleeting attraction for a kid and thinking that getting her a monologue book would be the end of it.

However this wasn’t just some ‘I want to be an actress’ phase and when her parents saw that she was pretty serious about pursuing it they made a couple calls with some agents that led to her getting a chance with some big time auditions. She said, “I did this monologue for her about my mom dying of cancer, she taped it and she put it on her Facebook as a joke. I think she captioned it something similar to ‘oh my little drama queen’ and a casting director just so happened to watch that tape and contacted my mom and said hey I have a friend who is an agent. I think your daughter should meet with them.”

Her Beginning as a child actress

Literally only three years after making this declaration and setting out to become an actress at the age of six this young Latina parade into the world of acting at the age of nine with the bit role of a girl in the 2012 American sitcom TV series ‘Rob’. Her second endeavor in film came as an appearance in the sixth episode of the series titled ‘The baby bug’ that was aired on February 16, 2012 and viewed around 10.6 million times. That is a lot of eyes and visibility for a young girl but it was truly becoming clearer that this was the arena she was made for.

Following ‘Rob’, she portrayed the role of Amy Moore in the ninth season of the popular American police series ‘CSI New York’ in one of its most unique episodes titled ‘unspoken’ that was aired on October 19, 2012.

Now it is a sediment that there are a few bigger testaments to an actor or actresses raw talent and popularity than when we start seeing them in superhero films. Well it seems like Jenna Ortega has subverted that sediment in a sense because she made her debut on the big screen with the critically acclaimed box office hit Iron man 3 an sequel to Iron man and Iron man 2. She essayed the role of vice president’s daughter in the film and emerged as the year’s second highest grosser and with the way that the MCU works, who knows if there ever will be an opportunity for Jenna to reprise her role.

Continuing onwards with landing roles in blockbuster films, Jenna Ortega this time a step into the horror genre where she was next seen in the James wan directed Insidious Chapter 2 an American supernatural horror film that released on September 13, 2013. The film was a Blockbuster and saw her playing the part of Annie dipping her toe back on the world of television Jenna played a recurring role as Zoë Leon in the 2014 American comedy drama TV series ‘Rake’. That year she also ended up landing the iconic role as Mary Anne in the American direct-to-video comedy flick ‘The little rascals saved the day’ that was released on April 1st by universal pictures.

Jenna Ortega herself had a rather prolific 2014 because she was also featured in the comedy TV series ‘Know it all Nina’. Jenna played the title character of Nina. She displayed that she had no problem with making audiences laugh and having already appeared in superhero flicks supernatural horrors and excelling in comedy series it was evident that already at this point in her still young career that she could perform in films that deal with a wide range of themes and genres.

Yet a breakup role hadn’t even come. At this point Jenna was struggling between small and big screen projects while still yet to become a teenager she got her big break when she bagged the recurring role of young jane age 10 in the critically acclaimed and popular American satirical romantic comedy tv series ‘Jane the virgin’.

Jenna Ortega has said that the character she plays, Gina Rodriguez has always been a big inspiration for her. She said, “She has influenced me to spread more love on social media, stop caring about what people think, to be real with acting and following your instinct and to stand up for what I think is right”.

The series has earned Jenna much recognition and accolades for her performances of the central character’s younger version at age 10. Out of the four younger, Jane seen in the flashbacks Ortega’s version is seen most frequently.

Stuck in the middle

One of the most remarkable portrayals up into this day that gave Jenna Ortega a lot of fame and recognition is the role of Harley Diaz in the Disney channel’s American single camera sitcom tv series ‘Stuck in the middle’ that debuted on February 14, 2016. Stuck in the middle is about the Diaz family and especially revolves around Jenna’s character ‘Harley’ an engineering whiz who is the middle child of seven kids in the Diaz family. Aside from this being an immensely popular role that many kids enjoyed and saw themselves in, stuck in the middle and all the roles that Jenna plays are important just as far as representation for young Latino women goes.

She told when asked about the importance of this, “it is very important to me because I feel there are not as many Latina leading ladies out there as there should be and I want to help change that”.

Apart from receiving applause for portraying varied characters on screen at such a young age she has also won the hearts by giving voiceovers as Princess Isabel in the Disney channel’s American popular animated TV series ‘Elena of Avalor’ that debuted on July 22, 2016.

Jenna was a bonfire star at this point and still very much a child with much of her breakout roles coming from family-friendly Disney channel roles and Jenna receiving that child actor label throughout her career.

She started to feel the added pressure she told, “There’s a stigma that that’s all you could do or you’re just not a serious actor there were multiple times where I was seriously considering quitting and stopping. Nobody tells you this until you get there. There’s an awkward phase in your life where you’re going through puberty and there’s a two-year span where the work is just extra hard to find. I was too old for the young roles and too young for the older roles. It was really frustrating…”.

Jenna knew that she was at a transitional point of her career and that it was time to take a leap in the more serious projects that displayed her growth as an actress, which is exactly what she would do. In 2018, Ortega starred in the film ‘Saving Flora’ as the lead role of Don, the daughter of a circus owner. The film received positive reviews from critics and Ortega received praise for her performance. She also received the nomination for best lead actress at the Southampton International Film festival.

Crossing over in the Morris dreaming projects Ortega had been cast in the main role of Ellie Alves on the second season of the ultra-popular Netflix thriller series ‘YOU’ which was released on December 26, 2019.

In ‘YOU’ her character is a smart and meddling girl who likes to act older than her true age. Ortega commented on working with co-stars Penn Badgley and Victoria Pedretti stating that, “I wish I’d gotten to shoot with Victoria more because I think she’s really talented. Penn is such an eloquent speaker so well thought and respectful and so kind. Just a pleasure to work with”.

In March 2021, the high school drama film ‘The fallout’ was released in which Ortega portrayed the lead role of Vada. It was released on HBO Max on January 27, 2022.

Jenna was casted as Tara Carpenter in the slasher film ‘Scream’ in 2020 on which she stated that, “I don’t think there are words in the English language that correctly express how happy excited and nervous I am for this journey. When working with co-stars Neve Campbell, Courtney Cox and David Arquette“. She stated that, “you never know what to expect when you’re meeting people of that standard but they truly were the most down-to-earth people, sweetest people”.

Jenna is currently working on the sequel to this Scream movie, which will also be the sixth entry, made into this screamed film franchise most recently.

And the project that has many of us excited is Tim Burton‘s supernatural series ‘Wednesday’ where Ortega will play the titular role of Wednesday Adams which she called a new chapter in her career stating that she hopes to do Wednesday Adam’s justice. To prepare for the role Jenna said that she underwent “the most physical transformation I’ve ever done. I cut my hair and it’s black and mannerism-wise, speaking cadence-wise, expression-wise, I’m trying to pull from a different toolbox this time around. I think it’s a surprise to the audience but myself as well”.

I think many of us cannot wait to see Jenna’s portrayal of Wednesday in this upcoming series but as of right now you are ala caught up on the life story of Jenna Ortega.