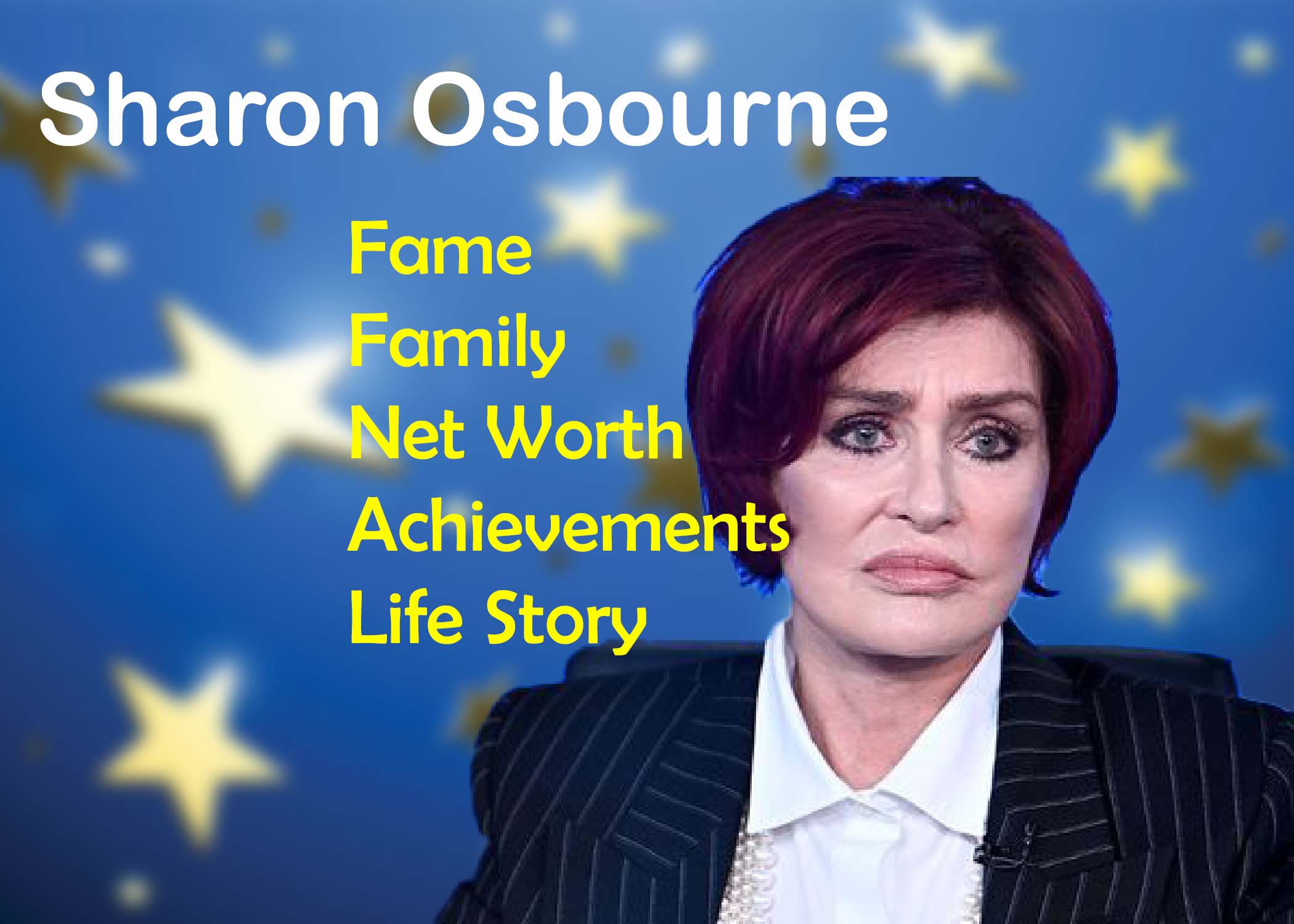 This entertainment manager came to prominence after she appeared on a reality TV show called ‘The Osbournes’ which aired on MTV. She also became a talent show judge on TV shows including the ‘X Factor’ and ‘America’s got talent’. She has also hosted her own TV talk show called ‘The Sharon Osborne’ show.

Sharon Osbourne has released three autobiography books and one novel. Her talent management company ‘Sharon Osbourne Management’ has managed the careers of ‘Queen’ ‘ELO’ ‘Gary Moore’ and Sharon’s husband and children. Back in 2006, Sharon’s autobiography ‘Extreme’ was named the Biography of the Year at the British book award.

Her full name is Sharon Rachel Osbourne but she’s also known as heavy metal mom. She was born on October 9, 1952 in Brixton London England making her 70 in 2022. she stands at 1.575 meters or 5 feet 2 inches tall. The star sign of Sharon is Libra. Sharon, along with her husband has been honored with a ‘Silver Clef Award’ at a London ceremony for their contribution to the music industry.

Sharon had revealed that she had become pregnant when she was 17 years old after she lost her virginity. Osborne’s parents forced her to have an abortion.

She is the daughter of a music promoter and rock and roll entrepreneur Don Arden and his wife named hope. Sharon also has a brother named David and his talent manager describes herself as of Ashkenazi Jewish and Irish heritage. During her childhood, Sharon was surrounded by violence and her father would regularly threaten someone. Sharon’s mother became cold and indifferent following a car crash. Don has managed some of the biggest musical acts such as ‘Small Faces’, ‘Queen’ and ‘Little Richard’’. Although this man earned a lot of money, Sharon’s father was poor at money management and his family often lived in poverty.

To escape her troubled life she drank to excess and as a result, Sharon was becoming a violent person herself. Even after leaving home, Sharon experienced serious and violent situations with her family.

Sharon Osbourne met Black Sabbath vocalist Ozzy Osbourne when she was 18 years old. Sharon used to work for her father Don Arden. At that time, Don was managing Black Sabbath. In 1979, Ozzy was fired from the band and Sharon started dating him. She also took over his management as a solo artist and in July 1982, the pair got married in Maui, Hawaii.  The couple has three children including Amy, Kelly and jack. Their marriage was plagued by drug use, violence and alcohol. Osborne was even arrested for driving while intoxicated.

Moreover, the pair used to fight physically and Sharon has revealed that they would beat. This woman has described herself as a beaten woman and Ozzy knocked out her front teeth but the pair still remain together and has not divorced.

Sharon became Ozzy’s manager when she was 27 years old and helped him launch his solo career. She organized the recording of Ozzy’s first solo album titled ‘Blizzard of OZ’ and at the same time, Sharon was finding another band for him. This album was a huge success and it sold more than 6 million copies. The next album was titled ‘Diary of a madman’. Sharon managed the successful career of her husband through the 1980s and 1990s. Later she also found ‘Ozfest’ along with Ozzy, an annual festival tour of the US and other countries featuring performances of hard rock bands and heavy metal bands.

with the management of Sharon, Ozzy released 12 albums then she began managing other bands with her management company and has managed well-known bands including ‘Queen’, ‘Smashing Pumpkins’ and ‘Motor head’. Although Sharon is considered a driving force behind the musical success of Ozzy.

She did not become a significant celebrity until her reality TV show ‘The Osbournes’ was released debuting in 2002. This show immediately made her a famous figure in the entertainment world. The Osbornes ran until 2005 and enjoyed extremely high ratings in the US and Britain and in 2003 she started hosting her own show called ‘The Sharon Osborne show’.

During the same year, Sharon along with her family hosted the 30th annual American music awards. She is also a well-known mentor and judge on Britain’s talent show called ‘X factor’. In addition, in 2007, Sharon appeared as a judge on the second season of ‘America’s got talent’. In 2010, she was selected to be a co-host for a female focused show called ‘The Talk’. This show focuses on motherhood and other related issues.

Moreover, Sharon has acted as a guest in ‘Loose Women’. In 2005, Sharon’s autobiography ‘Extreme’ was published. This year Sharon Osbourne appeared as herself in the 5th season episode 2 of Lucifer. Sharon has also made a cameo appearance in ‘Doctor Who’. Her acting roles include a recurring voice-acting role in ‘Jake and the Never Land Pirates’.

The combined net worth of Sharon Osborne and her husband Ozzy Osbourne is 220 million dollars.

Sharon and her husband Ozzy previously owned a mansion in Los Angeles, which they sold to actor Jessica Simpson for 13 million dollars. the pair had moved into this house back in 2011. The mansion covers an area of 11,000 square feet and features six bedrooms and ten bathrooms.

In 2003, they bought the Malibu beach pad for 5.1 million dollars. The house is situated inside a gated community in downtown Los Angeles California. The massive home features 4,500 square feet of living space and has five bedrooms and four bathrooms. This mansion also features a small gymnasium, a study room, a spa and a garage that can simultaneously hold up to six vehicles. The pair also owns a house in Jordan’s Buckingham shire.

Sharon Osbourne owns the following cars- a BMW 7 series, a black Range Rover, an Audi r8 and a Ferrari

Sharon has sent her daughter or son’s feces in tiffany boxes to people she felt had unreasonably criticized her or her family. In fact, she sent box excrement to a journalist who criticized Osborne’s teenage child. Sharon also sent a note to that journalist saying “I heard you’ve got an eating disorder, eat this”.

In 2004, Sharon’s house in Jordan’s was burgled who stole items worth 2 million pounds. The items taken during this burglary included two pairs of diamond earrings, a 52-karat sapphire ring, diamond necklaces pearl, an engagement ring and wedding rings. Sharon appeared on Crime Watch after this incident and offered a reward of 100,000 pounds for returning her valuable jewelry.

Sharon Osbourne was recently on the headlines because of her injury during the filming of one of her upcoming paranormal TV show. Fortunately, she was discharged after a day in the hospital. Sharon is now 70 and fit as her 20s.